Last year, when Pip had just turned six and was starting to read on her own, my sister-in-law had the fantastic idea of teaching our daughters how to be pen pals. It was an easy sell since they were already best friends who had lived in the same city until not too long before. It was great writing and reading practice for both of them, and the letters they wrote back and forth, telling each other about the things going on in their daily lives, were absolutely precious.

She sweetened the deal with a pen pal box that she wrapped for Pip for Christmas. It was self-contained, and completely full of everything a kiddo might want for letter writing. Pip went nuts for it. 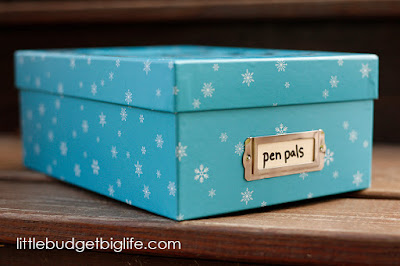 This year, writing to a pen pal is part of our weekly lesson routine. Pip currently has four--all cousins and friends in other states--so it usually works out to writing one letter to a different pal each week, each month. Sometimes, she has received a response by the time a pal's name comes back around, and sometimes she hasn't, and either way, it's totally ok.

If you would like to create a pen pal box for your child, or as a gift for another child, here is a list of items that have proven useful or fun or both. You can easily customize a box to fit a child's personality and interests. It's super simple, inexpensive, and so much fun!
- Box (Pip's is a decorative photo box from a craft store, but a shoe box would work just as well)
- Colorful stationery
- Pens and pencils
- Stickers
- First class postage stamps
- Return address labels for the recipient (Shutterfly sometimes offers them as a free gift!) 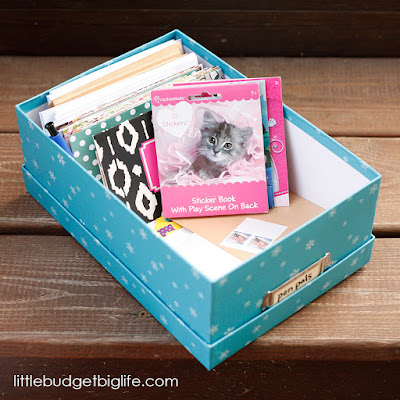 Posted by Little Budget Big Life at 9:00 AM