My now-3-year-old nephew is crazy about Team Umizoomi and all things numbers, patterns, and shapes. A couple of weeks before his birthday, Mimi and I--with the blessing of his parents--brainstormed and came up with this simple Team Umizoomi party plan.

The location made it easy; they were hosting it at an indoor play place, complete with private party room and brightly colored decor. (This was super fun and frugal because his homemade Geo costume had won a Halloween costume contest a few weeks before, and the prize was a complimentary party!)

Licensed Team Umizoomi items were not as abundant or easy to find as I had hoped, but we found a 12-pack of cupcake liners and toppers on Amazon for about $12. The liners were really designed for big cupcakes, and when we saw that they dwarfed the adorable ones that Mimi had made and frosted, we trimmed characters out of them and used them as additional toppers. The cake was from a gluten free boxed mix, the frosting was homemade, and the liners, sprinkles, and candles were from the Dollar Tree. All together, it made an adorable tray of individual treats. 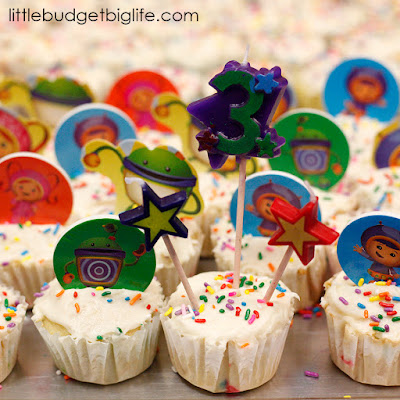 Because the party room was already bright and colorful, the only things needing decor were the tables. They were blue, so we didn't need the blue tablecloths that we had picked up at the Dollar Tree. We simply unrolled a length of craft paper from one end to the other, as a runner, and then cut large, basic shapes from 12x12 pieces of rainbow colored cardstock to set atop it to give a nod to Geo's belt. I originally intended to tape them down, but when the birthday boy saw the scene, he wanted to take them off the table and create new patterns with them. It was easy entertainment while we waited for his guests to arrive. 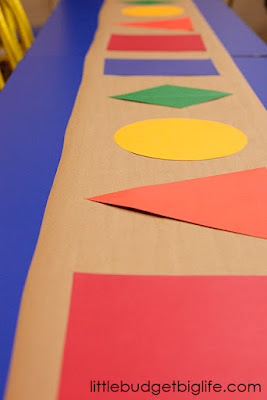 We added bottled water, single-serving ice cream cups, and lots of friends and cousins to go wild in the play place together, and we had ourselves a party!

Posted by Little Budget Big Life at 8:00 AM