I understand why so few of us donate blood. It takes time. We might be turned away due to health or history. It's not at the top of anyone's list of fun things to do.

Few of us expect to need a transfusion, but when you or your loved one needs blood due to an accident or medical emergency, the gratitude felt for the people who donated, never knowing whose life it might save, is immeasurable. 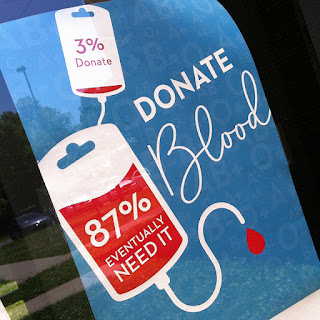 I know, because I had this experience in the fall of 2015. Chris suddenly started feeling very bad, and we thought he had food poisoning. By the time we realized it was much more severe, he had to be transported to our local hospital by ambulance, and from there, transferred to a larger hospital that could perform an emergency surgery immediately. By that point, he had already lost a substantial amount of blood due to a Dieulafoy's lesion (as it was described to me, an ulcer that formed on an artery in his stomach wall). Thankfully, the surgeon was able to stop the bleeding quickly.

Chris recovered beautifully, and we are grateful for the emergency staff, the surgical team, and the nurses and doctors that made up his post-surgical care team. He now has a local GI specialist and we know to keep an eye on these things. I drive him a little bonkers, probably, but any time he has any discomfort with his stomach, I am immediately questioning him about what it feels like, what he has eaten, if he's had too much coffee recently, and on and on.

What does this have to do with donating blood? Well, following surgery, Chris needed to replenish his blood supply, and not just a little bit. When all was said and done, he required nine units of blood. NINE. I don't know how much he started with, but I can tell you that this was a LOT. Nine people, at some point in the days or weeks or months prior to his hospitalization, donated blood so that my husband and Pip's dad could survive this unforeseen and horrific medical emergency.

After we left the hospital, I decided I wanted to donate blood in order to give back. I had never done so before, and the idea made me slightly nauseated. But I was so thankful that the supply was there for him when he needed it that I was determined.

The first time I donated, I didn't do great. I got dizzy and a bit weak. The sweet women running the drive knew what to do for me, and I was fine, of course. It turns out that although I was mentally prepared, I hadn't done everything I could to be ready, physically. They recommended that, next time, I be sure to eat a good meal and drink plenty of water in the hours prior to donating.

The second time, I followed their suggestions, and it didn't go much smoother. I was only able to give what they referred to as a "baby bag." I asked if it would even be useful. Yes, I was assured, it could literally be used for a baby who needed blood. Thinking about an infant needing blood--and the thought of being the parent of said infant--reinforced my resolve.

I haven't given up. I'm sure the third time will be better.

I am clearly not the best at donating blood, but I am trying. I sincerely ask anyone who is reading this to at least consider finding out how to donate where you live and if you are eligible. You never know whose life it might save: it could be a stranger you never meet, or it could be someone you love dearly. Like I said before, few of us expect to need a transfusion. I hope you never do. But if or when the need arises, having the resources available could make all the difference in the outcome.

Posted by Little Budget Big Life at 7:00 AM